Ever wondered what Michael Phelps does outside the pool? To start, he relaxes in his 6,010-square-foot-home. Warning: this Arizona home will give you a severe case of house envy! 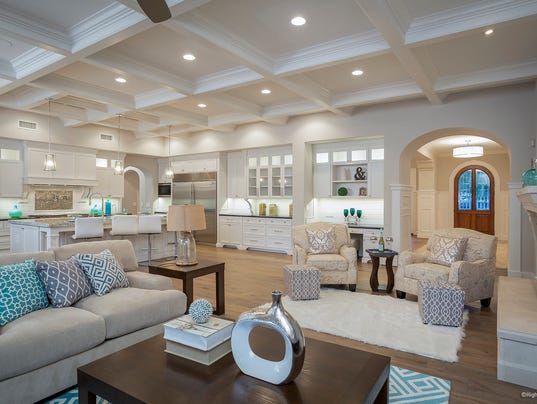 Swimming legend Michael Phelps bought this $2.53 million home in Paradise Valley, Ariz., in 2015. Phelps is selling it in June 2018 for $4.125 million.(Photo: HighResMedia www.highresmediallc.com)

He bought the posh Paradise Valley, Ariz., house, with crisp white décor and views of Camelback Mountain, in late 2015 before winning his 28th Olympic medal in Rio.

Phelps paid $2.53 million for the Santa Barbara-style house in the pricey metro Phoenix enclave, according to public records. The 6,010-square-foot house has five bedrooms, six-and-a-half bathrooms, and, of course, a great swimming pool.

It also has four fireplaces, a 350-bottle wine room, shiplap walls and a sports room. The house was built in 2015.

Phelps bought the house after becoming Arizona State University’s assistant swim coach. It’s not clear yet why he’s selling. It could be he and Nicole Phelps are looking for a bigger Valley home to make room for their second son, born in February.

More: Michael Phelps opens up about fatherhood on Facebook Live

More: When athletes share their battles with mental illness

“Our backyard looks right at Camelback Mountain,” Phelps told The Associated Press in early 2016. “You go outside in our backyard, and we have orange and tangerine and lemon and lime and peach and apple — all these different fruit trees growing in our backyard.”

The most decorated Olympian ever bought the house through an LLC.

A Baltimore house linked to Phelps sold for almost $1 million in July 2016.

More: Michael Phelps taught 1-year old son how to do his backslap

More: Baby No. 2 on the way for Michael Phelps, wife Nicole

Successes and failures from past North Korea summits