The supermarket giant said it would shutter 14 area stores in mid-August. But eight of those stores will be sold to Harris-Teeter, which Kroger owns.

A link has been sent to your friend’s email address.

A link has been posted to your Facebook feed.

We try out the Kroger Scan, Bag, Go system and compare it traditional shopping.
The Enquirer/Phil Didion 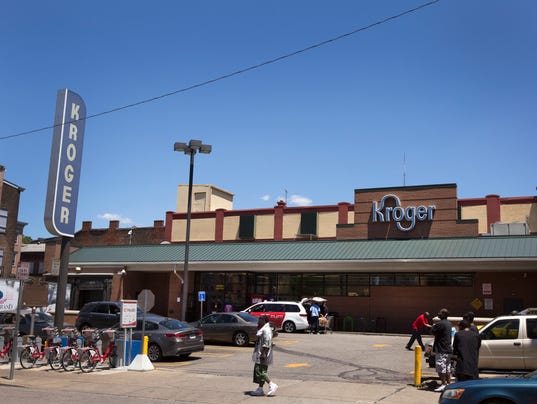 The city of Cincinnati and Kroger have announced this Vine Street Kroger in Over-the-Rhine will close after the new one is built Downtown at Walnut between Court Street and Central Parkway. The new supermarket will be two levels and should open in the summer of 2019. The 18-story project also includes apartments and a garage, and it’s being developed by 3CDC.(Photo: The Enquirer/ Liz Dufour)

After years of flat sales, Kroger announced it would exit the Raleigh-Durham market in North Carolina – sort of.

The Cincinnati-based supermarket giant said it would shut 14 area stores in mid-August. But eight of those stores will be sold to Harris-Teeter, which Kroger owns. Agreements to sell two other locations are also under contract.

“We have decided to close our stores in the highly competitive Raleigh-Durham market,” said Jerry Clontz, president of the Mid-Atlantic Division of Kroger. “We have not been able to grow our business the way we would like in this market.”

Kroger acquired the Harris Teeter chain in 2014. While the Kroger brand has never been a major name in Raleigh or Durham, the company lists them both as major markets with more than 50 stores (most under the Harris Teeter banner).

The announcement affects 1,500 associates, half of them full-time. Kroger said it would aid them in finding new employment.

More: Aldi supermarket whiskey the best? One drinker’ journal put it to the test

More: Amazon extends discounts for Whole Foods to 10 more states. Is yours on the list?

New York City free things to do this summer