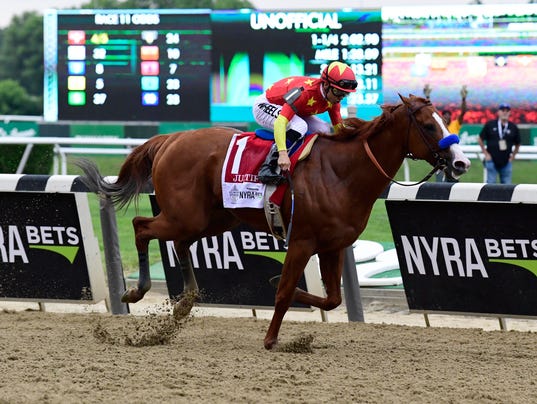 ELMONT, N.Y. — Despite a deal for his breeding rights worth a reported $75 million, the connections of Triple Crown winner Justify plan to continue racing him through the end of this year, they said Sunday morning.

“We’re looking forward to sharing him (with the public) more,” said Elliott Walden, the CEO and racing manager for WinStar Farm, which owns a majority share of the horse. “He’s now become a household name, and I’m looking forward to his next race just as much as you guys are.”

The question now for Justify, who became the first horse since Seattle Slew in 1977 to win the Triple Crown with an undefeated record, is how the rest of his career might take shape.

GOAT?: With two Triple Crowns, is Bob Baffert the greatest horse trainer of all time?

Some clues could come from how trainer Bob Baffert handled American Pharoah, who got a bit of a break after winning the Triple Crown in 2015 and returned to the track on Aug. 2 to win the Haskell Invitational at Monmouth Park. After a shocking upset loss in the Travers at Saratoga — the biggest summer race restricted to 3-year olds — there was some question whether Baffert would run him again. But American Pharoah stayed on course for the $6 million Breeders’ Cup Classic, which he won in dominating fashion against older horses to finish off his career in style.

Baffert said Sunday he will essentially do the same thing this time he did with American Pharoah, which is to bring him back to Churchill Downs for a week or so and then likely to Baffert’s home base California.

From there, he’ll read the horse’s physical signs before determining the next steps.

“Usually about a week later you can see how much of a toll it’s taken on him,” Baffert said. “We’ll sit down and figure out a little gameplan after that, but (right now) we have nothing at all.”

If Justify remains healthy and sound, Baffert will have plenty of options to map out his summer and fall campaign, with the obvious goal being the Breeders’ Cup Classic on Nov. 3 at Churchill.

The question is how many races he’ll have between now and then, especially considering Justify made his career debut on Feb. 18 and ran six times in a span of 111 days, a significant workload for modern horses.

It would be hard to imagine Justify running again before the Haskell, a race Baffert has won eight times. The Travers, a race with significant history, could have some appeal on Aug. 25. However, if Baffert prefers to keep the horse out West, the Pacific Classic on Aug. 18 at Del Mar could be an appealing target.

In addition to Justify, Baffert also has arguably America’s top 4-year old in his barn in West Coast, who was last seen on March 31 running second in the Dubai World Cup. Those two could end up on a collision course to face each other at the Breeders’ Cup.

“Our focus on was on each race as it came up, and now we can take a deep breath and just see how the horse is,” Walden said. “The great thing about being with Bob and having him as a trainer is he knows when the horses are right. He’s so in tune with his horses, and he’s not going to bring horses up here unless they’re right. He’ll get Justify right and then we’ll make a plan, but nothing has been decided yet. We’ve just ben focused on the Triple Crown.”

One more factor could potentially extend Justify’s career into a 4-year old season. In 2017, Gulfstream Park in South Florida established the Pegasus World Cup, a race where up to 12 people can put up a $1 million to reserve a spot in the gate and then either enter a horse in the race or make an arrangement to sell or lease their spot to another owner.

Because of the timing in late January, it allows a horse to run one more time before breeding season begins. And with a world record purse of $16 million for this year’s version, it could be an enticing option for Justify’s career farewell next year.

ESPN’s Darren Rovell reported before the Belmont that Justify’s stud rights were sold to Irish-based Coolmore, arguably the world’s top breeding operation, for $60 million with a $15 million bonus if he won the Triple Crown. WinStar is yet to confirm the deal.