People around the world remember the millions killed during the Holocaust.
USA TODAY 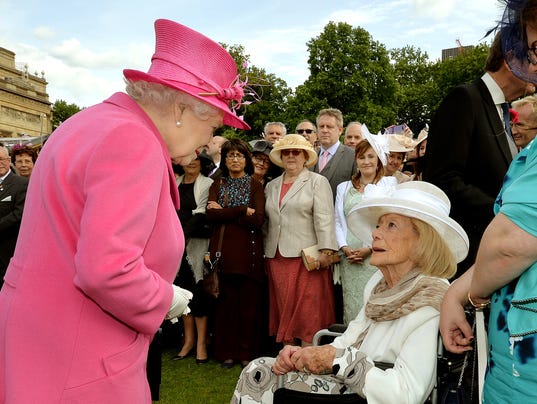 Polish writer and Holocaust survivor Gena Turgel, the “Bride of Belsen” who survived stints at four concentration camps and provided solace to Anne Frank, has died in her adoptive country of England at age 95.

Her stirring memoir of pain and hope, I Light a Candle, was published in 1987 to rave reviews.

“My story is story of survival,” she said at a Holocaust Day ceremony in April. “It is also a story of 6 million who perished. And maybe that is why I was spared, so that my testimony would stand as a memorial. Like the candle I light for the men and women who have no voice.”

Turgel, who died last week, was born in Krakow in 1923, the youngest of nine children. After the Nazis invaded Poland in 1939, her family was ordered to give up all their belongings. A brother was shot and she, several siblings and her mother moved to the Krakow ghetto.

More: Holocaust survivor tells the story of a rare letter that made it out of Auschwitz

She was shipped to Plaszow labor camp and then was part of a forced march to Auschwitz-Birkenau in 1944. Months later she  was part of the “death march” to Buchenwald before finally being sent to the Bergen-Belsen camp.

It was there, working in the camp hospital, that she nursed Anne Frank as the 15-year-old died of typhus in the winter of 1945.

“I washed her face, gave her water to drink, and I can still see that face, her hair and how she looked,” Turgel told the BBC.

Weeks later the camp was seized by British troops. Among the liberators was Norman Turgel. Six weeks later they were married. Her wedding dress, made from the parachute of a British paratrooper, is on display at the Imperial War Museum in London.

Beers inspired by wine and spirits

Suicide contagion and why are suicide rates rising in the US

THE VOICE APPS REPORT: The issues with discoverability, monetization, and retention,...