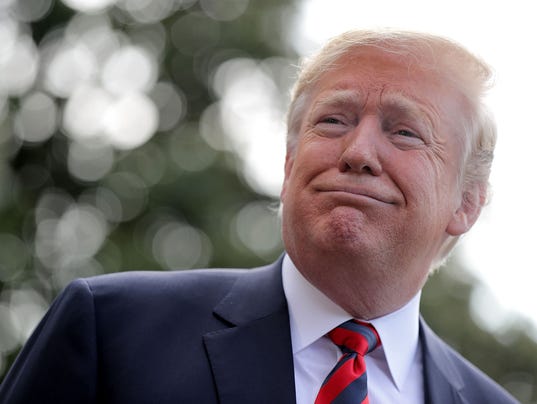 Before leaving the White House for the G-7 Summit, Trump told reporters he “probably will end up supporting” the bill, which Sens. Cory Gardner, R-Colo., and Elizabeth Warren, D-Mass., unveiled Thursday.

“I support Senator Gardner. I know exactly what he’s doing,” Trump said. “We’re looking at it. But I probably will end up supporting that.”

Trump’s backing would signal a turn from his Justice Department’s stance on marijuana legalization.

In January, Sessions rescinded an Obama-era memo assuring state-regulated marijuana dealers that federal prosecutors would leave them alone if they followed state regulations intended to keep pot out of the hands of kids and money out of the hands of drug cartels.

Trump had indicated on the 2016 campaign trail that he’d support states’ laws on cannabis. In March, Gardner said Trump agreed to respect state-legalized pot, indicating a break from Sessions.

Gardner’s bipartisan legislation, which also has backing in the House of Representatives, would bar the federal government from interfering with any state-approved marijuana legalization and permit marijuana businesses to use the federal banking system.

“We need to take a states’ rights approach to the legal marijuana question,” Gardner tweeted Thursday. “Our bill does not legalize marijuana. Instead, it allows the principle of federalism to prevail as the founding fathers intended and leaves the marijuana question up to the states.”

Nine states and the District of Columbia have legalized marijuana use, but it remains a Schedule 1 drug, meaning the Drug Enforcement Agency considers it to have no accepted medical use and a high potential for abuse.

However, many Americans view of cannabis has changed in recent years. According to a January poll by the Pew Research Center, more than 60% of Americans believe recreational marijuana should be legal, double its popularity in 2000.

Biggest news you missed this weekend